No Will? Part II: What Authority Does Your Estate’s Administrator Have? 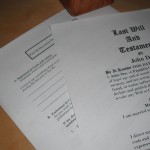 This blog series explores the problems and complexities that may occur when someone dies without a Will. My first blog post discussed the process for appointing an estate Administrator. In this post, I will address the authority that an Administrator may or may not have to do the job at hand.

Nonintervention powers, in essence, mean the court has given an Administrator the authority to perform the tasks involved in a probate without having to continually request the court’s permission every time. These tasks include: selling, leasing or mortgaging real and personal property; accepting or rejecting creditor’s claims on the estate; distributing assets to the beneficiaries; and closing the estate.  If the Administrator must continually go to court to request permission to perform various tasks, as you can imagine, that takes time and increases the attorneys’ fees associated with the probate.

Generally, when you nominate a Personal Representative in your Will, you request that he or she be able to serve with nonintervention powers. But, without a Will, the court may put restrictions on the Administrator’s authority. The pertinent statute, RCW 11.68.011, is set forth below:

(1) A personal representative may petition the court for nonintervention powers, whether the decedent died testate or intestate.

(3) The court may base its findings of facts necessary for the grant of nonintervention powers on:

(a) Statements of witnesses appearing before the court;

(b) representations contained in a verified petition for nonintervention powers, in an inventory made and returned upon oath into the court, or in an affidavit filed with the court; or

(c) other proof submitted to the court.

As you can see, obtaining nonintervention powers when there is no Will nominating a Personal Representative to be appointed with such powers is not necessarily a straightforward “sure thing.” Often, a hearing must be scheduled, notice provided to the beneficiaries and potentially to creditors, and the parties must submit their best case as to whether or not nonintervention powers should be granted. For example, suppose Daniel Decedent died, with no Will. Sally Survivor, Daniel’s wife, wants to be the Administrator of Daniel’s estate and to serve with nonintervention powers. Sally was Daniel’s second wife, and they had been married for two years. Daniel had separate property that he obtained prior to the marriage, and also had adult children from his prior marriage. Sally will need, through her attorney, to schedule a hearing and provide advance notice to Daniel’s children. If one or more of those children retains counsel, appears at the hearing, and argues that Sally should not receive nonintervention powers in order to ensure their interests are fully protected, it is questionable as to whether the court will grant Sally’s request.

The best way to avoid this type of contentious, expensive mess is to have a properly drafted Will in place, which clearly indicates your desire that the chosen Personal Representative serve with nonintervention powers.