It’s Not What You Think It Is 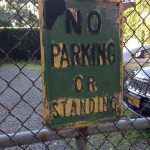 On a recent weekend, I headed out to enjoy in a pleasant walk around Greenlake. Crowds gathered for ever-popular crew races, and I drove around for some time attempting to find a parking space. I noted a woman in her 20’s who was standing in the middle of a parking space with no car in sight. I called out to her from my car, “Hey, what’s going on here? You can’t hold on to that space if there’s no car pulling into it.” She quickly responded with much certainty, “Oh yes I can. There’s no law against it. He just called me and he’s on his way. I’m not moving.” I told her that no, actually, she couldn’t do that legally. Again with much certainty, she declared that I was wrong and repeated “there’s no law against it.” Rather than engage in a pointless debate, I drove off and found another space.

The young woman’s assertion that “there’s no law against” standing in the middle of the parking space is demonstrably false. Seattle Municipal Code 11.70.120 clearly states, “The operator who first begins maneuvering his vehicle into a vacant parking space shall have a prior right-of-way to park in such space and no person shall attempt to deprive him thereof by blocking his access or otherwise.” Even though this woman’s assertions about the law were wrong, I have no doubt that she sincerely believed that “there’s no law against” blocking a parking space.

Many people who aren’t attorneys vehemently believe that the law allows them to do certain things or prohibits certain things. And, like the young woman and the parking space, they are completely wrong. Unfortunately, many times, the results of these misconceptions can be much more serious than gaining or losing a parking space. I tend to see these sorts of misconceptions most frequently in the estate planning realm. For example, the woman who scribbles her last wishes on a piece of paper or incorrectly prepares her Will via an inexpensive online product and then firmly believes that she is “good” and does not need the assistance of counsel. Often, because the result isn’t immediately apparent – such as a secured parking space – the woman never finds out that she is wrong. She rests assured in the knowledge that her estate planning is completely taken care of and her wishes will be carried out. It’s her family who finds out she was wrong, after she’s deceased. Then her family is forced to deal with the resulting mess and, perhaps, the knowledge that the actual distribution of her estate is nothing like what she originally envisioned.

There are many things that, admittedly, I don’t know. I’m not an accountant, so I hire a CPA to help me with my quarterly filings and annual tax return. I didn’t major in Business in college, so sometimes I need to seek some outside expertise in running my small business. I don’t have a design or technical background, so I didn’t build out my own website. I don’t ever want to be the person who is convinced that I’m correct, but I’m not. Instead, I want to stay in my lane, stick to what I know, and be right.

Are you sure you are right about legal decisions you’ve made concerning your estate planning or your business? If you want to be right, rather than just think you’re right, let us know. We’re happy to help.