By Sherry Lueders February 19, 2014 No Comments

What lessons can a novel about gold miners in 19th-century New Zealand teach about estate planning? Quite a few. In The Luminaries, which was awarded the prestigious Man Booker Prize in 2013, author Eleanor Catton sets her story in a rough-and-tumble frontier town in the midst of a gold rush, spinning a complex yarn of dead bodies discovered under decidedly 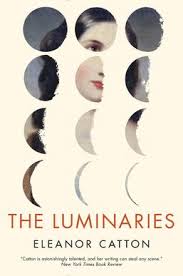 suspicious circumstances, prominent citizens disappearing without a trace, and a large and colorful cast of characters.

A reviewer in the New York Times described the book as “not even a novel in the normal sense, but rather a mass confabulation that evaporates in front of us, an astrological divination waning like the moon, the first section 360 pages long (or are those degrees?), the last a mere sliver. But it’s a sliver that delivers.” How many estate planning books carry that level of praise?

The tale unfolds after the body of Crosbie Wells, a hermit, is found in his cottage in a remote area upriver from town. Love, death, and deception play monumental roles in the narrative, but so do the laws of intestate succession, property, and contract. Wells died without a will and, because he was a hermit with no known family to inherit his claim, his property was quickly sold. Weeks after his body is discovered, however, his widow Lydia sails into town (literally – the town is primarily accessible to the outside world by sea) and reveals her claim on the estate as Crosbie’s spouse. Meanwhile, a fortune in gold is discovered in the hermit’s cottage, along with an unsigned deed transferring a sum of money equal to the fortune from Emery Staines, a wealthy prospector, to one of the town’s members of the oldest profession. A complex cast of characters attempts to unravel the mystery.

There wouldn’t have been much of a story had the characters consulted an attorney instead of creating such a delightful mess for the reader, but for those who prefer their drama to be in fiction, here are a few estate planning lessons from the book:

The Luminaries is a fantastic book, an old-fashioned page-turner so engrossing you probably won’t even realize you’re reading about estate planning.