Reprinted with the permission of the King County Bar Association. 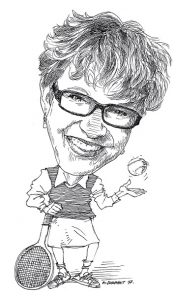 Stacey Romberg doesn’t just want to know whether you play tennis — she wants to know whether you have a tennis ranking. And, if you do, what that ranking is. Tennis and the law are two driving passions in Stacey’s life. She has a theory that many of the same skills necessary to succeed in tennis — grit, tenacity, meticulous preparation, and hours of practice — are also critical to success in the practice of law.

Stacey grew up in Boise, where she competed in her first tennis tournament in the fifth grade. After winning the tournament, held in a neighborhood park, she was hooked on the sport. Stacey went on to compete as one half of a formidable doubles team through junior high and high school. She was an Idaho high school state champion in tennis, as well as a ranked junior player in the Intermountain Section, which included players from Idaho, Montana, Wyoming, Colorado, Utah and Nevada. Her former doubles partner from junior tennis is also an attorney today, practicing in Idaho.

Stacey knew that she wanted to be a lawyer before she attended college. Tennis beckoned, and she seriously considered a career in tennis as a coach. But upon learning that a tennis coach whom she admired as both a coach and a player was unable to support himself without significant help from his parents, she solidified her decision to pursue a career in law. She has never regretted choosing law over tennis, although she has certainly played a good bit of tennis over the years.

While attending Idaho State University in Pocatello on a tennis scholarship, Stacey majored in political science, with a history minor. There, Stacey developed an interest in politics, serving as an intern with the U.S. House of Representatives, as well as interning with then-Idaho Lt. Gov. David H. Leroy, formerly the state’s attorney general.

Her experience working for Leroy, including serving on his paid gubernatorial campaign staff while a law student, has had a significant influence on her career. One of the many things she learned from him was that part of being an effective lawyer is devoting significant time and attention to speaking and writing.

After graduating from ISU with high honors, Stacey attended the University of Idaho College of Law in Moscow. Throughout law school, she continued to play tennis and worked as a tennis instructor. She served on the law review and graduated from law school a semester early by taking courses through the summers (while giving tennis lessons).

Once she had taken the Idaho bar exam, Stacey loaded up everything she owned into her two-door Chevrolet Sprint and left Idaho in the rearview mirror for the other Washington. In D.C., she worked on Capitol Hill and earned an LL.M. in international law from Georgetown University Law Center. As an attorney working in the nonpartisan Senate Office of Legislative Counsel, she helped draft legislation that included the Americans with Disabilities Act and the Organic Foods Production Act.

During that time, Stacey’s work on the Alcoholic Beverage Labeling Act gained the most visibility. While her writing has been published in numerous publications, including the Puget Sound Business Journal, the American Bar Association’s GPSolo eReport, and this esteemed publication, by far her most widely reproduced work has been the alcohol warning label she helped draft in her work as Senate legislative counsel:

GOVERNMENT WARNING: (1) According to the Surgeon General, women should not drink alcoholic beverages during pregnancy because of the risk of birth defects. (2) Consumption of alcoholic beverages impairs your ability to drive a car or operate machinery, and may cause health problems.

Stacey later moved from Capitol Hill to private practice at the D.C. law firm of Fort & Schlefer, reviewing government contracts and working as a registered foreign lobbyist representing the interests of German shipbuilders.

By 1993, Stacey yearned to be closer to home and left the beltway to return to her Pacific Northwest roots, landing in Seattle. She has practiced in Washington ever since. In the beginning, she used skills developed in D.C. to leverage a position as a legislative attorney for the state Senate. During her early years here, she also worked at the Williams & Williams firm, and as a pro tem judicial magistrate.

In 1999, Stacey made an aggressive move, charging the net and starting her own firm, Stacey L. Romberg, Attorney at Law, where she practices in the areas of business law, estate planning and probate. She hasn’t looked back.

She has been innovative from day one, operating her practice as a virtual law firm. In the beginning, Stacey went virtual for the most practical of business reasons: She couldn’t justify paying rent for space she didn’t need. As a result, her firm has never had a physical office. The decision to operate “virtually” in the late ’90s has become an aspect of her brand that carries her firm forward today.

Stacey makes no apologies and has no regrets for “going virtual.” She recalls one instance where she was representing a party in an estate dispute. In the process of hammering out the details for a non-judicial dispute resolution agreement, opposing counsel visited her home office to review the details. He noticed a drip in the adjacent bathroom. Before Stacey knew it, he had paused the negotiations to fix the toilet. (As his skills as an attorney surpassed even his highly competent plumbing acumen, she assumes he didn’t charge his client for the time spent dabbling as an amateur plumber.)

Stacey is a positive person, and she is quick to enumerate the many upsides of a virtual firm: lower overhead, fewer distractions, no time wasted on a daily commute, and the pleasant company of her officemate, Roger (i.e., Federer), a male tabby cat. Stacey is nearly as passionate about animals as she is about tennis. Roger is a vital member of her office team, and one of the most enjoyable aspects of her practice is helping clients provide for their pets in their estate plans.

Tennis remains a passion. While a knee injury has kept her off the court in recent years, Stacey continues to be involved in the sport through her work as a board member with Tennis Outreach Programs (TOPs), a nonprofit organization that aims to “empower youth for lifetime success through tennis, education, fitness, and character development regardless of economic circumstance.” Its mission of tennis and community outreach was a match point for Stacey, who emphasizes community involvement in both her practice and life.

Stacey joined the TOPs board in 2011. A year later, TOPs opened the Eastside Tennis Center in Kirkland to fulfill its mission of providing “tennis for everyone.” In Stacey’s view, the skills developed playing tennis help to set kids up for a lifetime of success. She analogizes tennis to boxing, where the player is in a one-on-one battle of wits, skill and strength with an opponent, requiring an extra dose of mental toughness, plus the ability to fully accept personal responsibility for all of one’s results — both the happy wins and the embarrassing losses.

Like a good rally at the net, the practice of law continues to challenge her. Stacey notes that while practicing law is different for a mid-career attorney than for one just starting out, she enjoys how her practice continues to evolve and include new issues and challenges.

She continues to find joy and vigor in her practice through speaking engagements and writing about the practice of law. Stacey frequently speaks on topics ranging from legal ethics in social media to substantive areas of law for her practice, such as business formation and the Trust and Estate Dispute Resolution Act. She particularly enjoys talking and writing about how it is possible to follow the Rules of Professional Conduct and thrive as a modern attorney.

In her more than 25 years of practice, Stacey has seen numerous changes in the practice of law: sometimes for the better — maintaining a virtual law practice for more than 15 years — and sometimes for the worse, such as an apparent decline in civility among attorneys. Other challenges among attorneys include increases in substance abuse, failed relationships and mental health issues.

She believes many attorneys could alleviate such problems, as well as improve their practices, by paying more attention to their mental and physical health. While it may seem counterintuitive to prioritize taking time away from a law practice in which the billable hours define the day, dead attorneys don’t bill, and neither do attorneys who become too burned out to practice.

Physical fitness is a defining part of Stacey’s life and her practice. She heartily approves of 84-year-old Supreme Court Justice Ruth Bader Ginsberg‘s workouts with a personal trainer. Stacey’s own fitness routine includes spin, yoga and other group classes that involve weight training. Rain or shine (or snow), she wakes up every day at 5 a.m. to be at the gym by 6.

Her advice to attorneys who have recently started their own firms is to devote as much attention to the practice as a business endeavor as to the substantive areas of law. One element of her success is her willingness to constantly examine her practice, evaluate what she doesn’t like about it, and then fix the problem. For Stacey, success is derived from the ability to recognize and adapt to new challenges — not unlike a well-played game of tennis. 

Sherry Bosse Lueders is an of counsel attorney with Stacey Romberg’s firm, where she practices in the areas of business law, estate planning and probate. More information can be found at www.staceyromberg.com.