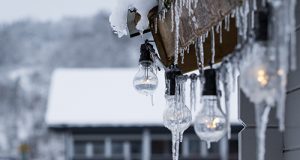 Since our law firm is virtual, my home environment is especially important to me because I spend so much time there. One source of constant irritation of late has been the less than pristine condition of my 29-year-old carpet, which I inherited when I purchased my house. I was determined to replace it. So I saved, budgeted, and interviewed various flooring companies. Finally, I arranged with the company I selected to have new carpet installed on January 14th – a date I was out of the office. I diligently removed all of the objects from tables and dressers, carefully packed up my ample bookcases, disconnected the television and related electronics, and was ready to go! Unfortunately, the best made plans sometimes go awry. On January 14th, as some of you may recall, we had snowy, icy weather. The carpet company managed to make it to my home, but their van could not access my icy driveway and the work needed to be rescheduled.

I understand well, as a business owner myself, that these things happen. Sometimes, through no fault of your own, a customer’s expectations cannot be satisfied. The employee from the carpet company told me that he had been yelled at by irate customers, angry that they had gone through so much fuss and bother to accommodate work that simply could not happen. Being a reasonable person, I didn’t yell at the carpet company. We simply rescheduled the work for another day after the storm had passed. But, suppose I had decided to be a jerk about it?

It’s important for businesses to consider protecting themselves by asking their attorneys to draft a force majeure clause as part of their contract with their customers. Accordingly to my trusty Black’s Law Dictionary, “Such clause is common in construction contracts to protect the parties in the event that a part of the contract cannot be performed due to causes which are outside of the control of the parties and could not be avoided by exercise of due care. See also Act of God.” This clause is actually common in a variety of situations, not just construction. It can be useful when any party’s performance can be prevented by an outside random event. “Act of God,” as referred to in Black’s Law Dictionary, means, “An act occasioned exclusively by violence of nature without the interference of any human agency.” In addition to natural events, a force majeure clause can also cover some manmade occurrences that might prevent contractual performance, including a strike or even an act of war.

Sometimes, people see a force majeure clause, view it as boilerplate, and don’t give it a second thought. However, as you can see by my carpet installation example, it can actually be quite significant. Suppose, in an act of crankiness and bad manners, I sued the carpet company for non-performance of their agreement? If I were the attorney who represented them, I would be grateful to respond by saying, “No. Actually, this situation was envisioned by the parties. See the force majeure contract signed by your client, which indicates that the carpet company is not responsible if they are unable to complete an installation on the agreed to date due to problematic weather conditions.”

Do you think a force majeure clause could be a beneficial addition to your business contract? Please let us know. We’d be happy to help.